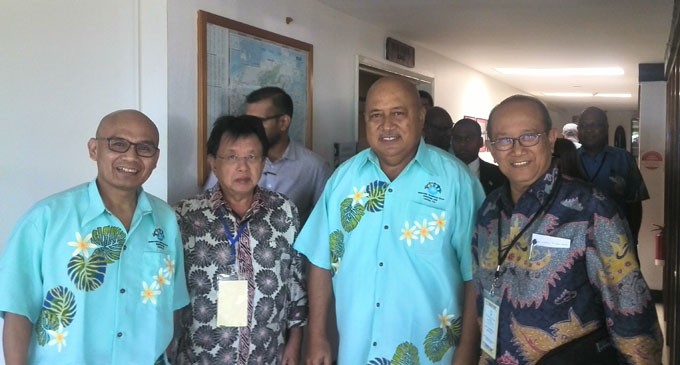 A senior delegation of Indonesian officials and delegates of the United Liberation Movement for West Papua met yesterday in a move instigated by the Melanesian Spearhead Group.

The two sides had been at loggerhead over West Papua’s struggle to have a separate state.
MSG Foreign Ministers meeting chairman, George Milner Tozaka said it was important to get both sides to sit at the same table and talk.
He said the objective of MSG is to look at the developmental interests of Melanesian countries and this included West Papua.
“We are constructively trying to engage both Indonesia and West Papua to talk and say what they want to say to each other in the meeting, but the main thing is to get them to sit at the same table and talk,” Mr Tozaka said.
He said one of the major issues was the membership of MSG and the inclusion of the United Liberation Movement for West Papua as observers, while Indonesia was accorded associate membership.
“The last meeting we had in Honiara we had been to work on the criteria for the membership of Indonesia and West Papua so that they can participate in the MSG.”
Mr Tozaka said Senior Officials Meeting (SOM) had a look through this issue and concluded that there was still a lot more work to be done.
“SOM have asked for more time for them to look into this issue.”
They would then submit their report to the Foreign Affairs Ministers meeting, before it was taken up to the Leaders Summit in Honiara on July 14.
The MSG is made up of three levels, the highest of which was the Leaders Summit, then the Foreign Affairs Ministers meeting and the Senior Officials Meeting.

Application for membership
The application for membership from West Papua and Indonesia in the Melanesian Spearhead Group has been referred to the legal committee.
Minister for Foreign Affairs Ratu Inoke Kubuabola said Fiji would raise its voice with Indonesia over the matter.
Ratu Inoke said Fiji had a good relationship with Indonesia.
“We respect the integrity and sovereignty of Indonesia under international laws.”
Meanwhile Ratu Inoke said Fiji still maintained its position that its participation in the Pacific Islands Forum would still remain at ministerial level.
“Our Prime Minister (Voreqe Bainimarama) still feels very strongly on that position.”
Fiji wants Australia and New Zealand to withdraw as members of PIF.
Edited by Paula Tuvuki, Fiji Sun
Feedback:  charles.chambers@fijisun.com.fj
fiji politicsIndonesiaMSGMSG MembershipULMWPWPNCL
Share 0 FacebookTwitterPinterestEmail

The curse of the Melanesian Way. Can Melanesia govern itself?

OPINION: MSG, West Papua Now It’s Down To The Wire

Sharma: The injection made my mum worse