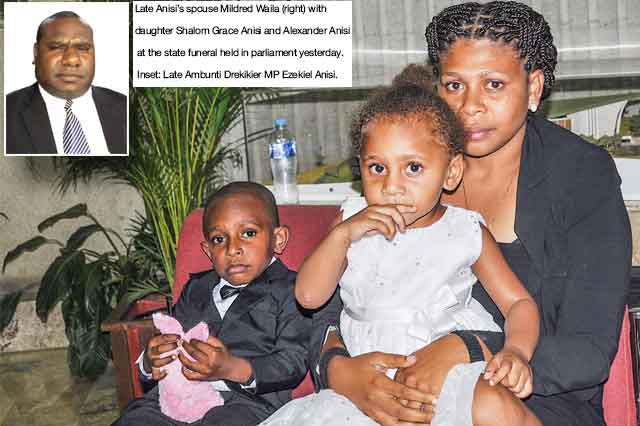 THE casket of the late Ambunti Drekikier MP Ezekiel Anisi was laid in Parliament yesterday and viewed by few MPs and families that gathered.
Anisi, the youngest MP from East Sepik, died suddenly in Port Moresby last month.
He collapsed and died only a few weeks into the campaign period.
He was the son of former People’s Progress Party secretary-general and premier of East Sepik, the late Alex Anisi.
During his funeral service at the Rev Sioni Kami Memorial Church yesterday, it was made known that his father (late Alex Anisi) also died on the eve of the national election in 2012 (Feb 28, 2012).
At the time of his death, his election committees and coordinators were already intact and were looking for a suitable replacement.
It was then that the late Ezekiel stepped in the political arena.
Born in 1988, Ezekiel started his early education at the Wewak Hill International School from 1996-1997. He proceeded onto the public school system and did Grades 3-6 at the Kaindi Demonstration School before transferring to Mongniol to complete his primary education.
In 2005, he completed Grade 10 at Bishop Leo Secondary School.
Ezekiel then proceeded onto the Don Bosco Technical Secondary School and completed studies in motor vehicle mechanics between 2008 and 2009. The casket of the 29-year-old Anisi will arrive in Wewak, East Sepik, tomorrow.
Source: http://www.thenational.com.pg/